Discover some of our most popular adventures in Malaysia: 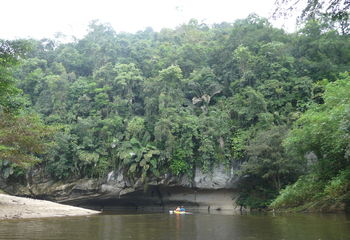 A cycling adventure through lovely, lush Sarawak, from Kushing to Semantan by road, path, and river. 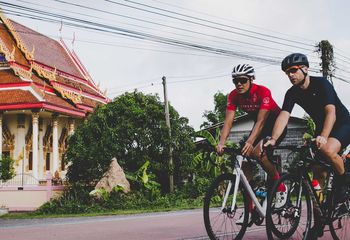 Thailand to Malaysia by Road Bike

Search all tours in Malaysia

Extending south from Thailand and sharing the island of Borneo, Malaysia is a diverse blend of Malays, Indians, Chinese, and indigenous groups, making it one of the most interesting places for cycling in the world. The Malay population is a blended mix of religions with Islam accounting for more than 60% of its population; keep in mind some areas of the country can be significantly more reserved than others. Today one of the most important stopovers for ships on global trading routes, Malaysia has always been a port of call for Indian, Chinese, Dutch, and British traders and merchants, who have lent their influence to the eclectic makeup of some of its main cities, such as Kuala Lumpur, Georgetown, and Malacca. This creates a more multicultural landscape then most travellers are expecting.

The natural environment of Malaysia is the big draw for most cycle tourists: its dense jungles and remote mountains are home to rarely seen animals, like the critically endangered Malayan Tiger and the orangutan. One of the most biologically diverse countries in the world, the jungles of Malaysia are some of the oldest on the planet, making animal sightings extremely common while out cycling. Jungle tours on the island of Borneo will challenge your adventure spirit with rope bridge river crossings, remote mountain trails, and river boat rides which bring you through the heart of Malaysia's eastern frontiers. Spend a day volunteering at one of the many animal sanctuaries where you can contribute to the preservation of many of Malaysia's endangered species of animals. If you’re feeling extremely adventurous, climb Malaysia's highest mountain peak, Mount Kinabalu.

With its multi-ethnicities, eclectic cultural heritage, and stunning landscape, Malaysia has a lot to offer the cycle tourist. Having one of the most developed economies in Asia, Malaysia has decent infrastructure that makes the country more enjoyable to cycle than many are expecting. The cities are unexpectedly modern yet the rural areas still retain a ‘lost in time’ charm. The coastlines boast some of Asia's best beaches and are prone to high end development with resort communities beginning to pop up everywhere, however, there are always new beaches to find; this gives you the opportunity to soak your tired legs in the warm Indian, Andaman, Sulu, and Celebes seas. Touring Malaysia gives you the perfect mixture of rural and cosmopolitan cities, where you can encounter multi-ethnic peoples who have peacefully co-existed for years. The dense jungles and vibrant cities of Malaysia will fulfil the deepest parts of your adventurous soul.