Discover some of our most popular adventures in New South Wales: 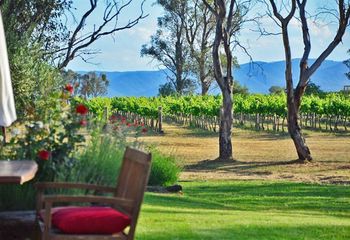 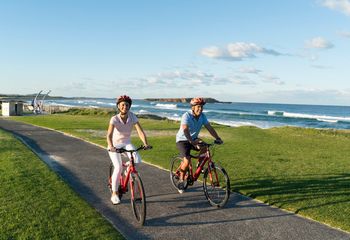 from $762View tour
For Families 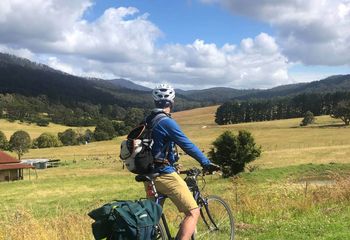 Kosciuszko to the Sea Supported Cycle

Climb to the highest point in Australia and be rewarded with sparkling views of the Sapphire Coast on this 5-day supported self-guided cycle tour. 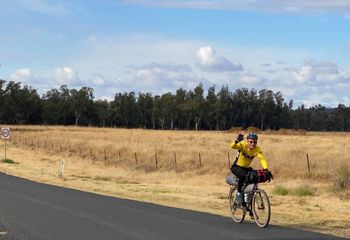 A cultural and historical loop ride on the groundbreaking Central West Trail of NSW over 8 days.

New South Wales is, of course, home to Sydney, Australia's most populous city with the harbour bridge and opera house amongst its many attractions. Nestled snugly in the warm belly of Australia, the southeastern state of New South Wales (NSW) borders three others with the capital territory sitting entirely within its boundaries. The southern coast, from Sydney to Victoria, is the perfect destination for a carefree cycle tour adventure, with meandering coastal towns and villages dotting the landscape, National Parks, lagoons and forests, and a host of tourist hotspots lining the way for a leisurely amble.

Stretching up the central and northern coast from Sydney lies a further array of welcoming coastal towns, famed beaches - think Bondi and Manly in Sydney and then Palm Beach and Byron Bay further north - to Tweed Heads cosying up to the Queensland border. Larger than life monuments, such as the big banana at Coffs Harbour, provide amusement and photo opportunities in this generously diverse state with whale watching, dolphin swimming and surfing bringing the wild fascination of the ocean up close and personal for those who dare.

In Byron Bay you can see the sunrise from the country's most easterly point and be the first to welcome in the new day, perhaps rubbing shoulders with some familiar faces, as this popular region is home to some Hollywood greats. Cycle touring Byron Shire is a wonderful melange of rural and coastal landscapes mixed in with a dash of bohemian to create a vibrant enclave with plenty of things to keep you occupied whatever your persuasion. For a more concentrated dose of all things alternative, head inland to colourful Nimbin, rustic Uki and beatnik Mullimbimby, full of eclectic markets, artists, buskers, charming cafes, eateries and bars with lively personalities animating the streets.

Away from the coast, NSW is also home to the enchanting Blue Mountains, flaunting gorged deep valleys carved out over time. Home to a variety of flora and fauna, this UNESCO World Heritage area now provides a glorious scenic playground for bush hikes and mountain bike trails alike. Stunning waterfalls, forests and caves envelop the rising landscape with villages, galleries, and delightful rural communities dispersed throughout. Accessible from Sydney, the Blue Mountains are just a few hours inland by car although a world away from its urban allures.

Similarly, the world-famous Hunter Valley wine region is conveniently just a short drive from the Harbour City. The Hunter is the oldest wine region in Australia which also boasts more cellar doors than its domestic counterparts. NSW is home to the boutique wine region of Mudgee further north, with vineyards lovingly scattered throughout a charmingly compact region, ripe for bicycle tour adventures.

Further south and inland, meeting up with the Victorian fringes, are the Snowy Mountain ranges, home to Australia's highest peak, Mount Kosciuszko. Perhaps snow sports are not the first association you may have with Australia, but plenty of snow accumulates here each year with the aptly named mountains offering alpine resorts to rival more celebrated destinations. Outside of winter, the mountain ranges are home to the Thredbo MTB park for some epic downhill riding fun not to be missed. For lovers of speed, the motor racing Mecca of Bathurst is also located in the state, in the serene-sounding Central Tablelands.

Of course, New South Wales also has a strong agricultural community with Tamworth, one such farming hub, being home to a long cherished and revered country music festival each year. The outback here is home to familiar and evocative names such as Broken Hill and Lightning Ridge, the latter being known for opal mining and its warm bore springs. Aboriginal culture, underground art caves, and tight-knit rural communities punctuate the region with rich history and a fascinating presence. This spirited state offers a huge variety of landscapes, interest, terrain and even weather throughout, providing the perfect canvas for a cycle touring triumph.