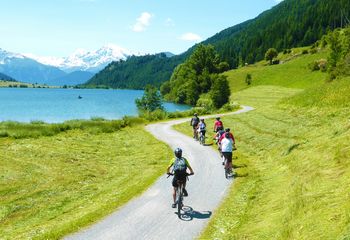 An easy-paced cycling vacation in Italy and Austria, ideal for those wishing to experience the beauty of the Alps and Italy in style over 8 days.

An elder statesman of central Europe, Austria’s cities and landscapes are a top destination for many cycle tourists. The cities are an eclectic mix of contemporary life and classic charm; the plazas, parks, and squares are filled with a vibrant life that can only be found in Austria. The rural countryside contains some of the most picturesque views in the world, with rolling valleys and snow-capped mountain peaks connected by dedicated cycling pathways. Austria is in the centre of Europe where the influence of the surrounding countries can be felt, yet it somehow remains quintessentially Austrian at its core.

Situated in the centre of the European continent and bordering seven countries - Germany, Switzerland, Italy, the Czech Republic, Slovakia, Hungary, and Slovenia - the Austrian cities of Vienna, Innsbruck, Graz, Salzburg, and Linz have been crossroads for travellers for thousands of years. The classic capital, Vienna, offers the best impression of Austrian culture, while the Tyrolean capital of Innsbruck is your gateway to the Alps. Graz, Linz, and Salzburg all feature some of the best culture and scenery in all of Europe, giving you plenty of urban options to explore.