Discover some of our most popular adventures in Indonesia: 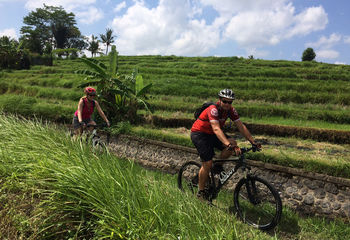 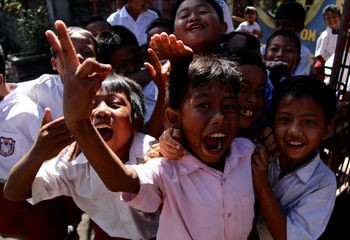 Bike into the real Bali and avoid the tourists on this epic trip of discovery.

Search all tours in Indonesia

Vast and dense, with unrivaled diversity, Indonesia is as exotic as they come. The country is made up of over 17,000 islands stretching over 5,200 km (3,231 mi) with 240 million people speaking 700 different languages, making it a task to tour. This sprawling country can be daunting to explore without the right plan as transportation can be unreliable, the roads hectic, and the destinations geographically far, so you want to think about the most efficient means possible of exploring this country. Java is by far the most populous island in Indonesia, as it’s home to the absolutely massive city of Jakarta; however, don’t let this throw you off, as Java is filled with a rich cultural history just waiting to be explored. Bali still remains the youthful surfer’s paradise of days past, with its laid back attitude and perfect waves, despite receiving the attention of big resort developers over the past 20 years. Bali is also an adventure seeker's paradise with ex-pats bringing all sorts of adventure sports to the island; it even boasts a full on bike park! So you will want to consider both on and off road cycling while you’re there.

Despite its proximity to Singapore and Kuala Lumpur, Sumatra remains one of Indonesia's least-occupied islands; the northern reaches are densely populated by jungle and that’s about it. The same can be said for Kalimantan, which makes up the lower ⅔ of the island of Borneo. On both these islands transportation can be a challenge, but the payoffs can be huge, as the islands are brimming with wildlife and wilderness unlike anywhere else on the planet.

The four distinct peninsulas that make up Sulawesi in Central Indonesia are prime for cycling: it packs immense diversity in both its landscape and its culture into one doable island adventure.

The cycling in Indonesia can be extremely varied; the landscape differs greatly from island to island, making it a destination for the adventure-inclined. Some parts of the island nation have world class infrastructure, and on others it’s almost completely lacking. You will want to work with a good tour operator to ensure you’re able to make the most of your island adventure. Set aside extra time to organize, travel, and navigate the country so you don’t get stuck in one place. It’s best to keep your trips realiztic in length as you can spend a lot of time traveling between destinations, especially if you’re relying on ground transportation. Indonesia boasts some of the world's best beaches, best wildlife viewing, and significant history, making it an immensely rewarding country to tour by bicycle.