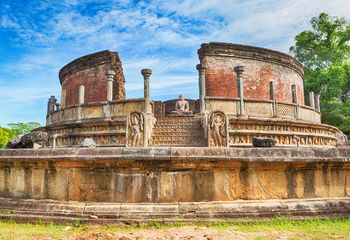 For thousands of years, Sri Lanka has enchanted travelers with its stunningly diverse landscape, cultures, and native fauna. A main stopover on the fabled ‘Spice Route,’ the island nation sits just off the southeastern shores of mainland India and has been a transportation and trade crossroads for centuries. The palm tree lined shores are home to some of the world's best beaches, and some of Sri Lanka's biggest cities, as the naturally deep harbors have been the foundation of urban development since sea travel first began. The capital city of Colombo on the western coast is still most people’s port of entrance and exit into Sri Lanka. The sprawling metropolis offers a busy and potentially overwhelming introduction to the island nation, yet it does so in a truthful, no-holds-barred fashion.

With over 2,000 years of recorded history, Sri Lanka is a haven for those looking to indulge in culture, as it has been the melting pot of Tamil, Hindu, Islamic, Portuguese, and Dutch influences. Sri Lanka is also the oldest known center of Theravada Buddhism, which is still practiced by the majority of the island’s population. A salubrious side effect of nearly two and a half millennia of Buddhism is that the country's northern plains are a cornucopia of sites for the culturally-minded tourist.

Although the civil war of the 1990s is still at the forefront of some people's opinions of Sri Lanka the country has rebounded since its closure, and is now headed in a forward thinking direction. Just as it was when the first travelers landed on its sandy shores, Sri Lanka offers an abundance of sights and scenery for any and all who come to explore.