Discover some of our most popular adventures in North Thailand: 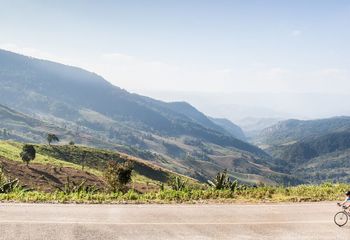 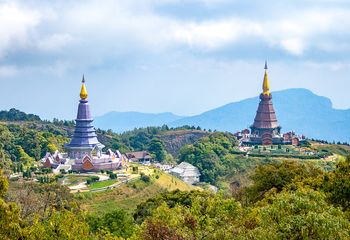 The ultimate road biking challenge through superb mountain scenery, close to the Myanmar border in Thailand for the best 9 days of your life. 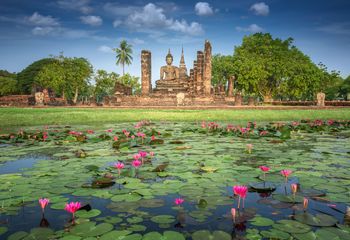 Search all tours in North Thailand

North Thailand is a breath of fresh air, as the hectic highways and overshadowing cityscape of Bangkok give way to an easier pace of life and natural beauty. Filled with fertile fields and mountain peaks, North Thailand offers gentle country lanes and challenging mountain roads, with a healthy mixture of world class MTB trails, all for a fantastic value for those on a bike. For thousands of years the north reigned as the dominant kingdom in Thailand, as the fertile plains and key trade routes brought wealth beyond comparison into the kingdom of Lanna. When you are in the north you feel like you are experiencing the real Thailand as every city and town has a centuries old temple to explore, making the north one of the most culturally rich parts of the world. The road from Bangkok to Chiang Mai is incredibly busy but it travels through one of the most culturally rich regions in all of Indochina, passing through the historic cities of Lampang, Phitsanulok, and Lamphun. If riding there isn’t your thing there are regular trains and flights between the two that are comparable in price. The climate in the north is more temperate, making summer cycling more bearable, as does the slowed pace of life.

Thailand’s second city Chiang Mai was once the capital of the Kingdom of Lanna; to this day it operates as Thailand's cultural, educational, and religious hub. The old walled city is jammed full of important temples and busy markets, making it a pleasure to explore. Unlike most of the major cities in Asia, Chiang Mai is a joy to discover on a bicycle; the streets are laid out in an easy grid, so you can always choose a side street over a main thoroughfare. Most of the sites like the old walled city, the night market, the Three Kings Monument, Lanna Folklife Museum and the Historical Center are an enjoyable city-cruise distance apart. Don’t be fooled though, as Chiang Mai is surrounded by mountains providing some of the most challenging climbs found anywhere, such as the grind to the golden temples atop Doi Suthep-Pui National Park just west of the city. There are plenty of day trips to see elephant sanctuaries, villages, and remote hill tribes that are offered in Chiang Mai’s tourism offices, so take your time in the city and see as much as you can.

Leaving Chiang Mai, the road to Pai, towards the border with Myanmar to the west, is one of the most spectacular in all of Thailand, as it winds its way through ancient villages tucked into the towering limestone mountains. Pai is one of the best places for exploring the sparsely populated northern mountains; roads and villages are few and far between, making you feel like you are on a true adventure. North to Chiang Rai will take you deep into the mountains, where you will for sure want to stop and rest before continuing on to Laos or Myanmar; they meet here, at the “Golden Triangle”, the former capital of opium growing.