Discover some of our most popular adventures in Eastern France: Alsace & the Route des Vins: 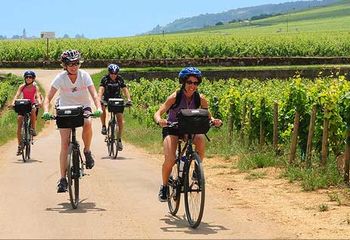 Bonjour or Guten Tag? This 7 day moderate to challenging cycling tour of Alsace is a journey into an incredibly beautiful and diverse region of France bordering Germany.

In the northeast of France, along the banks of the historic Rhine River, lies Alsace, France’s easternmost province. Heavily disputed for hundreds of years, Alsace has spent considerable time under the control of both France and Germany, which is reflected in its cities, food, beer, wine, language, street signs... and well everything!

The Romans brought their grape-growing prowess to the region and now the ‘Route des Vins’ is one of France’s most bike-traveled locations for good reason. The cycling is beautiful, the towns are straight out of a storybook and the food is delicious. There are few places in Europe that seamlessly blend two distinct cultures as well as Alsace. The Route des Vins stretches for 120 kms (75 mi) north to south along the foothills of the Vosges Mountains and is set just west of the major centers of Strasbourg, Colmar, and Mulhouse, so despite being a popular tourist destination, it doesn’t feel nearly as busy as you would expect.

The capital city Strasburg is a fantastic place to wander; the cobblestone streets, winding alleyways and mixture of fairytale and modern architecture really sets Strasburg apart from other cities. Housing one of France’s largest universities, the city itself is compact, lively, and charismatic, making it a blast to explore by bicycle. Smaller towns, like Riquewihr, Turckheim, and Bergheim, are also must-see destinations for their fantastic presentation of 12th-14th century architecture, intertwined by narrow cobblestone streets and fantastic views across to the Black Forest in Germany. Alsace is also the perfect location to jump the border back and forth between Germany and France, to make your trip truly unforgettable.

Riding in this area of France is best done in the spring and fall, as you can then avoid competing with the droves of summer tourists for accommodations. However, the right tour operator will ensure your lodging is sorted in any season. Fall is an absolutely fantastic time to take in Alsace; the harvest season brings the best foods to the table and the autumn colors will make every view breathtaking.